Because many of you have asked about the fate of my stranded cat, and because we only just got our power back last night so my mind is still on Hurricane Irene rather than writing strategies, I’ve decided to write this blog about my poor, miserable hard-luck pet.

Firstly I own three pets, one rabbit and one cat. Merry has always been the type of cat who is in the wrong place at the wrong time. While Pinto, the rabbit seems to just run around the house. I’m quite worried about Pinto’s eating habits as he quite picky, which is why I have been reading posts like Can rabbits eat strawberries? When Merry and his brother, Pippin, were kittens, Pippin would knock something over and disappear without a trace, but when I arrived on the scene steaming mad, there would be Merry in the middle of the room, frozen in fear. If somebody throws a ball, it will ricochet off the wall in order to bonk Merry on the head. If the hose is on, he will manage to get soaked. He’s just that type of cat. Still, despite living with Merry for eight years and knowing his misfortunes, even I was surprised that he managed to get stuck in a tree right before Hurricane Irene hit our hometown in upstate NY.

The saga started Thursday afternoon when we realized no one had seen Merry in several hours. Although my cats do go outdoors, they almost always stay close to the house. We searched, but there was no sign of him, not even when we called him for his 5:00 dinner. It wasn’t until the next day that we heard the yowling. It was coming from several houses down in a neighbor’s front yard. Sure enough, there was Merry, stuck in the crook of a tree. 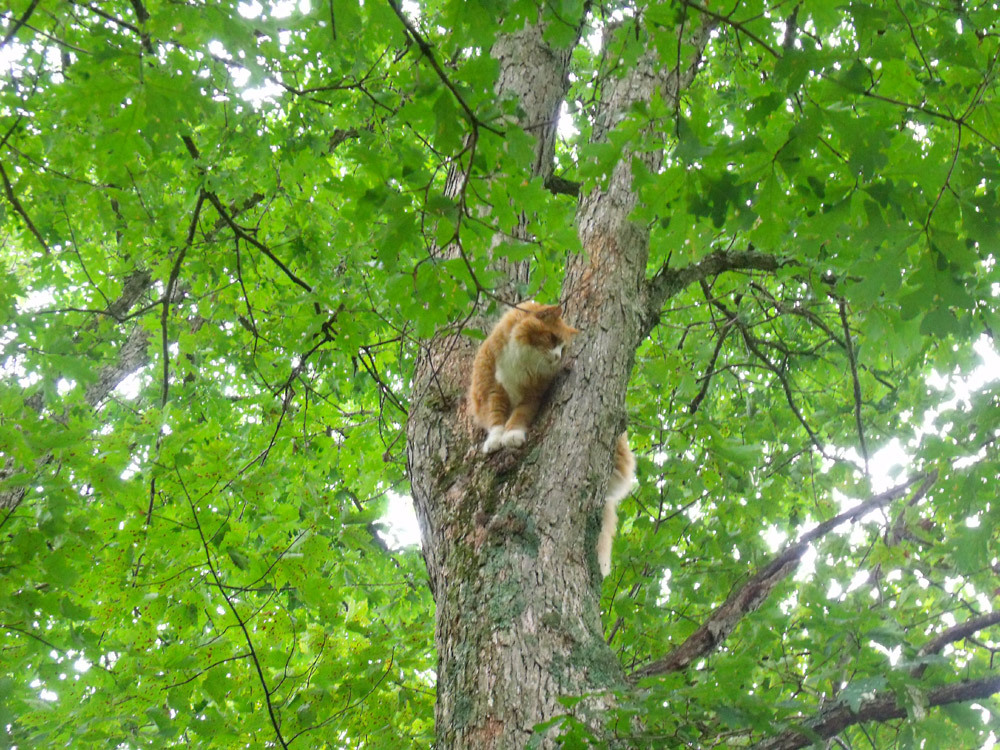 How did he manage to get into this situation? My guess is that one of the neighborhood dogs probably chased him, which has happened before. Although most areas have a leash law, ours does not because we live in the country and people have hunting dogs, which can’t do their jobs when leashed.

At first, I wasn’t all that concerned. Merry has gotten into worse situations. He’d been up a tree far higher than this one and after about 48 hours, he’d climbed down. That time, we’d called the fire department and been told in no uncertain terms that they don’t rescue cats and he’d just climb down on his own when he was ready. On that occasion, they were right. 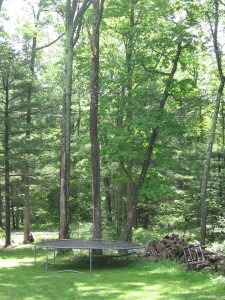 Merry in his previous tree climbing predicament – top of frame

So we waited. We called and cajoled. Shook the container of cat treats. Friday turned into Saturday and Hurricane Irene was schedule to hit our area that night. Now I started to feel a bit worried and appealed to Facebook friends for help. Someone suggested opening a can of tuna under the tree, and I thought that was a brilliant suggestion, but no luck. Someone else suggested using a hose, but he wasn’t within  range of one. I sent my husband (who is much taller than I am) out with the longest pole I could find, thinking we could prod the cat to come down, but it was five feet short. Although it sounds mean, Dustin even tried throwing things up at Merry to try and dislodge him before the hurricane hit. No luck.

At some point, our neighbors brought out their sturdy ladder (our was flimsy and wouldn’t reach) but climbing up to attempt a rescue only pushed Merry much further up the tree onto a far reaching branch. Now he was probably fifty or sixty feet up, way out of reach and the winds were getting stronger. Still, I felt certain he would come down as soon as the rain started.

Hurricane Irene hit Saturday night. We called and called for Merry and I wracked my brain trying to think of ideas we hadn’t tried. I remembered some scrap metal we’d found recently, and Sunday morning Dustin ran out in the wind and rain to try to reach the cat with an even longer pole, but it was too short. All day the winds raged, sending down countless trees in our area, but Merry held on. I worried and worried that the limb he was clinging to would break, or he’d be sent flying by the gusting winds, but when the rain stopped he was still there meowing piteously.

Now, I thought, he’ll climb down. It made sense to me that he wouldn’t attempt a climb while the branch was swaying, but surely (!) he’d come down once the tree was still again.

The sun came out. The wind died down. Merry did not budge.

We began calling tree service companies who might be able to use their bucket lifts to rescue him, but let me assure you… the days following a hurricane are not good days to be a cat stuck in a tree. Every tree company in our area was out on emergency calls, cleaning up the storm damage and trying to restore power.

All along, people kept assuring me that Merry would climb down on his own, but by now I knew they were wrong. By Tuesday, he’d been in the tree for six days – no food, only rain water – and I was starting to get frantic. After clinging to a tree through a hurricane I doubted he’d have the strength to climb down even if he decided to. He was not meowing much anymore, and when we’d visit him, he’d hardly move.

Finally, at five o’clock on Tuesday, we found a tree company willing to come out and rescue my cat. That evening Der Oskar Tree Service arrived with their big truck. 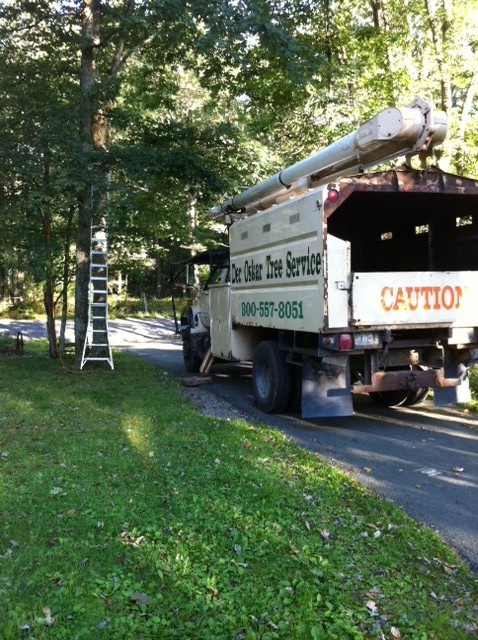 Armed with a pillow case, Der Oskar made the rescue. Yes, there was a heart-pounding moment when Merry fought him and nearly managed to fall off the branch, but in the end we received our cat, a bit worse for the wear. 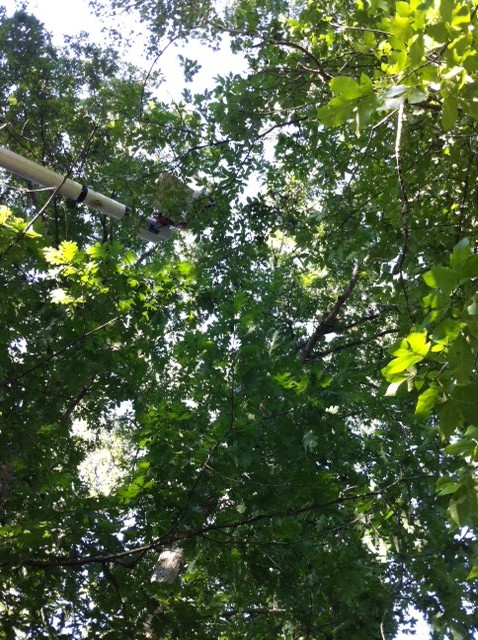 I would definitely say that Merry has used up at least one of his nine lives in this ordeal. Since he’s gotten home, he’s been sleeping in the basement – hidden away on some back room shelving. He’s had food and water, but mostly he’s curled himself up in a ball, and I get the impression he will probably stay that way for a long while to come. 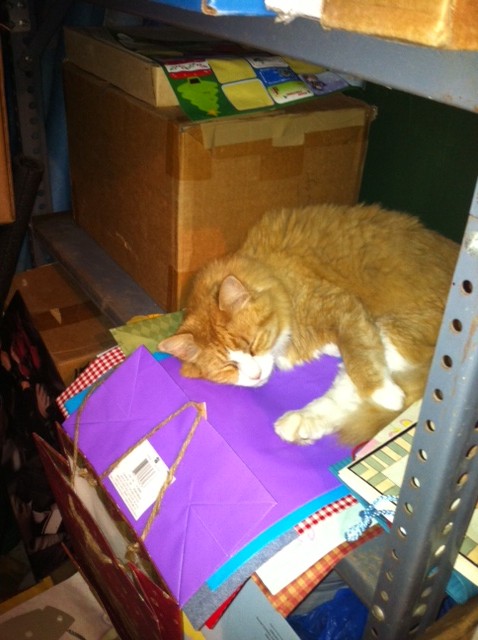 At least until his next adventure…