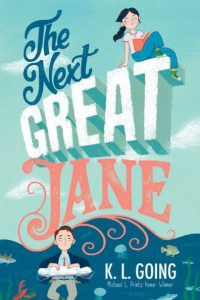 Jane Brannen wants nothing more than to become a famous author like Jane Austen–she just needs to figure out the key to literary success! Her chance to uncover the secret arrives when bestselling author J. E. Fairfax visits her tiny town of Whickett Harbor. Unfortunately, a hurricane rolls in and Jane gets stuck with the author’s snobbish son, Devon, instead. But when the skies clear, Jane realizes the wind has blown in something worse than annoying boys: Her mother, Susan, and Susan’s new fiancé, Erik, have flown all the way from Hollywood to file for custody and bring Jane back to California. Now she needs to find a mate for her marine biologist father and figure out what’s truly important about Whickett Harbor, so she can prove to her mother that this is where she’s meant to stay.

Reviews:
“Jane Brannen is an aspiring author from a small town where nothing ever happens. Things change quickly as best-selling author J.E. Fairfax arrives in Jane’s town at the exact same time a hurricane threatens to blow Whickett Harbor off the map. But nothing is going to stop Jane from her dream of meeting a real, live author. Not a hurricane. Not some insufferable snob, who happens to also be J.E. Fairfax’s son. Not even her mother, who threatens to take Jane away from the only life she has ever known. Jane doesn’t expect the heap of trouble she courts while trying to get the advice she was hoping for, but she does learn a lot about true love. Fans of Going will love her latest book, and new fans will emerge with a new favorite. VERDICT Going has created another original and captivating story by weaving engaging characters in an ordinary setting who do incredible and impossible things. An inspirational must-have for every library.”—School Library Journal, starred review

Though Maine’s Whickett Harbor is considered quaint by most standards, Jane has always loved her coastal town. On the night the story opens, Jane is bursting with excitement because a famous author, J. E. Fairfax, is giving a talk at the library, and Jane, an aspiring writer, is sure Ms. Fairfax will divulge important trade secrets. But then a hurricane breezes into town and ruins everything, prematurely ending the library event and throwing Jane into the company of Devon, one of Ms. Fairfax’s snooty, obnoxious sons. The hurricane also unexpectedly brings Jane’s mother back from Hollywood, handsome fiancé in tow. It is, if you will, a perfect storm of events that throws Jane’s life into chaos. Going (Pieces of Why, 2015) explores Jane’s internal confusion, allowing her to feel conflicted, angry, worried, passionate, and happy by turns. Yet, the story itself remains buoyant, with interesting plot developments, layered characters, humorous moments, and a healthy dose of marine science, courtesy of Jane’s father. When the issue of Jane’s absentee, starlet mother declaring she wants custody arises, Jane must take an honest look at what she wants her life to look like, while considering the merits of second chances. Adoration for Jane Austen and a matchmaking scheme worthy of Emma Woodhouse add an extra dash of heart to this wonderfully told tale.”—Booklist, starred review