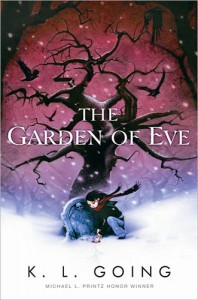 When Evie reluctantly moves with her father to upstate New York where he has bought an apple orchard, they dismiss rumors that the trees haven’t borne fruit in decades because the town is cursed. After all, Evie doesn’t believe in things like curses or fairy tales anymore. If fairy tales were real, her mom would still be alive. But then Evie receives a mysterious seed as an eleventh birthday gift and meets a boy who claims to be dead. When planted, the seed grows into a tree before their eyes, but only Evie and the boy can see it-or go where it leads.

The Garden of Eve mixes eerie magical realism with a deeply resonating story that beautifully explores grief, healing, and growth.

Reviews:
"Still deep in mourning for her mother, who died ten months before, Evie and her father move from Michigan to rural New York. He has bought a house and apple orchard but neglected to mention that it’s beside a cemetery, and that the orchard, with its black, twisted trees, is considered by the townsfolk to be cursed. Evie quickly makes two friends: elderly Maggie, who grew up in the house, and a mysterious boy who claims, despite Evie’s skepticism, to be Alex, a boy who died the week before and is buried in the graveyard. Strangely, Maggie’s late brother has left Evie a birthday present—a seed, which may have come from the Garden of Eden. Evie discovers that she has her own role to play in the events that unfold, and finds too that her relationship with her father changes as they learn how to move on with their new life together. Believably and with delicacy, Going paints a suspenseful story suffused with the poignant questions of what it means to be alive, and what might await on the other side—questions that neither the children nor the adults can answer with certainty, even at the end."—Horn Book Magazine.

"After she and her dad move to upstate New York to reclaim an old, decaying orchard, Evie understands that her father is trying to escape her mother’s recent death. She finds herself beginning to believe the legend that the barren orchard and its surrounding town are cursed after another girl named Eve disappeared many years earlier. Her sense of supernatural and real worlds colliding feels especially strong after she meets the sad ghost-child Alex, who had been buried in the small cemetery adjacent to their house just days before. An eleventh birthday letter from her mother and a small stone box ontaining a single seed force Evie and her dad to come to grips with their new life and its possibilities. Symbolism abounds in this beautifully written book—life, death, the tree of life, Adam and Eve, and the Garden of Eden are all alluded to and explored. Although challenging for its intended audience, the story offers hope to those readers who will identify with Evie, Alex, and the adults who love them."—Booklist.

"Evie and her mom had a very special relationship where they were able to bring their imaginations into the world of magic through bedtime stories. Evie longs for the days before her mother became ill, but it is not to be when her mother dies. In hopes of a new start Evie and her father move to Beaumont, New York where Evie takes a journey into a fairy tale of her own.

At first the dismal apple orchard that her father purchased is too dreary for Evie and to top it off it’s next door to a cemetery. The events that occur after Evie meets a boy that looks just like a local boy that died, the curse of the farm and the girl that vanished, and the gift of a single seed are nothing less than spectacular.

Her father has always been a scientific man and that if there is no explanation than it cannot be real.

“Evie,” he said at last, “you know I’m a realist. I always have been. I trust what I see with my eyes, and it’s hard to believe anything you’ve told me is true…” “But I can tell you this, I’m not going to make the same mistake again. If you need a seed to find Adam and bring him home, then, by God, we’re going to find a seed.”

Through her journey Evie’s father begins to BELIEVE in the unexpected and unexplainable.

K.L. Going immerses you in the heart and soul of Evie from the start and you’ll feel the beat of your heart in your head with every word you read. Kudos to K.L. Going for this wonderful heartfelt novel!"—Donna M. McDine, The National Writing for Children Center.

Note to teachers
The idea for The Garden of Eve came about in two parts. The first was when my young cousin, Kyle, said “You should write a book about an apple tree.” His suggestion came out of the blue and it intrigued me. I began to think about all that apple trees have represented in literature and I started to come up with story ideas that might feature a magical tree.

Unfortunately, several months after that, my husband’s brother was killed in a car accident. As the family struggled to come to terms with this loss, I thought about the way children view death, and all the questions they have about it. I thought about death as a barren landscape. A dark, twisted tree without blossoms.

Gradually, the story of a girl and a boy, both dealing with losses, who must now find a way to bring life into their own barren landscapes, began to form. I hope the questions I’ve come up with below will help you discuss this book with the kids you teach.