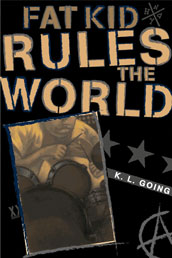 Cover of the hardback edition

His name is Troy, but to the world–and in his internal dialogues· he is the Fat Kid. Really Fat. Almost 300 pounds of sweating, unhappy insecurity. Then out of a moment of despair comes magic. As Troy considers whether to splatter himself on a subway track, Curt MacCrae, a charismatic punk rocker/homeless kid/dropout, comes along and stops him. For the price of a meal, Curt befriends Troy, and he sees something under all those layers: a potential musician, a friend, and someone with the ability to see through life’s bull.

In an outstanding, funny, edgy debut, K.L. Going presents two unlikely friends who ultimately save each other.

Reviews
"The opening lines of this first-person narrative immediately hook readers as they enter the lonely, troubled, self-deprecating world of Troy Billings, a 296-pound 17-year-old who contemplates ending his life by jumping off a New York City subway platform. He is interrupted by Curt MacCrae, a legendary punk-rock guitarist and sometime-student at W.T. Watson High School.

When Curt connects with him and “saves his life”, Troy is amazed that someone, especially someone as cool as Curt, wants to befriend him. An unlikely, almost symbiotic relationship develops between these two.

Curt convinces Troy to be the drummer in his band, even though he hasn’t touched the drums since seventh grade. He is flattered by the suggestion and believes that being in the band could be his key to acceptance.

Troy’s voice is candid, irreverent, realistic, and humorous. He imagines the events of his life in facetious headlines always related to his weight. Curt himself is the product of a dysfunctional family, and he has plenty of problems of his own, including a reliance on drugs. 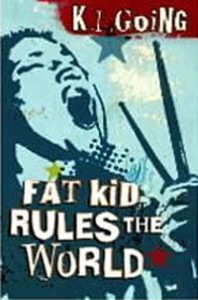 "His name is Troy, but to the world — and in his internal dialogues — he is the Fat Kid. Really Fat. Almost 300 pounds of sweating, unhappy insecurity. Then out of a moment of despair comes magic. As Troy considers whether to splatter himself on a subway track, Curt MacCrae, a charismatic punk rocker/homeless kid/dropout, comes along and stops him.

For the price of a meal, Curt befriends Troy, and he sees something under all those layers: a potential musician, a friend, and someone with the ability to see through life’s bull.

First-time novelist Going has put together an amazing assortment of characters. Troy is the ultimate fat kid, the kind whose every move, every thought is predicated on what it is like to wear a coat of blubber. Curt, as thin as Troy is fat, is a combination of Kurt Cobain, Ratso Rizzo, and a fairy godfather. He sprinkles Troy with the dirt and grime of punk rock and brings out the prince hiding inside the weight (to the book’s credit, Troy doesn’t get any thinner).

Equally well drawn are the lesser characters, including Troy’s father, a former Marine with an innate sense of what kids need. The narrative could have been tighter in places, but this is an impressive debut that offers hope for all kids — dross transmuted into gold."—Booklist, starred review. 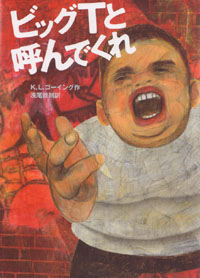 "At six foot one and nearly three hundred pounds, Troy Billings has but one dream — to make an inconspicuous exit from the world. Filthy, emaciated, usually homeless Curt MacCrea [sic] finds him contemplating the subway tracks, claims to have saved his life, and demands a free meal.

Curt has something to offer, too: a new dream for Troy, in which he’s the drummer in Curt’s proposed punk band, Rage/Tectonic. Troy knows he’s being cajoled, wheedled, and manipulated by Curt at every turn, but an immediate rise in his social status convinces him to stay aboard this train; Curt is indeed a gifted guitarist and a school legend, and any friend of Curt is a force to be reckoned with.

Troy has no drumming experience, but he’s swept into the current of Curt’s determination, and by gad, he actually learns to drum, or at least to provide the powerhouse banging that can drive the real star’s screaming riffs and raging lyricism.

Troy’s contemptuous younger brother begins to offer some respect, and Mr. Billings, an ex-Marine who believes anything can be achieved through will and discipline, surprises Troy by encouraging his efforts and treating Curt with unexpected kindness.

Going draws her characters with compassionate acuity; Troy’s bumbling advance toward drumming competence and self-respect is funny and heart-wrenching, while Curt’s semi-stoned rush at stardom exposes both his brokenness and his promise. Likewise, Going cuts through the theatrical pretenses of punk rock to capture the angst and artistry.

The language is raw, but the relationships are tender, and readers who followed the sadder fortunes of Koertge’s Stoner and Spaz will grasp thankfully at the possibility of double salvation."—Bulletin for the Center of Children’s Books, starred review.

"FAT KID RULES THE WORLD is totally phat! While the joyfulness and quirkiness of the story and the body image issue may allow for grouping this book with some others you’ve read before, K. L. Going is truly a new voice on the YA scene…"—Richie’s Picks.

Note to teachers
The inspiration for Fat Kid Rules the World came from a mix of punk music, Kurt Cobain biographies, and believe it or not, a rejection letter! An editor to whom I submitted a previous novel noted that sometimes characters need to be larger than life. Hmm… I wondered what would happen if I created a physically larger than life character.

Having always been a self-conscious kid (although I wasn’t fat growing up) the theme of self image was natural for me to write about. And any writer loves to mix in their current passions, so somehow the world of punk rock worked itself into the fray. The result is a book I hope will speak to teens, and hopefully appeal to kids who might rather be watching VH1 or listening to their IPod.

The issue of bad language often comes up, but I think that most kids A) have already been exposed, B) can understand that the language is used in the context of the punk scene and C) are better able to read discerningly than we give them credit for. Perhaps the language itself can lead to great discussions – should characters swear in teen novels? When would it be wrong to censure a character?

I hope this novel sparks lots of great discussion in your classrooms!