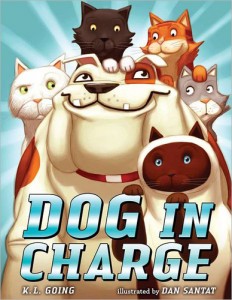 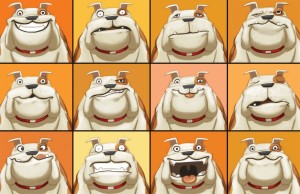 Dog can sit.
He can stay.
He can even dance.

But while the family is away,
Can he keep the cats in line?

All one, two, three, four, five of them?

Reviews
“Printz-winner Going aces her picture-book debut with this comical saga of a tutu-wearing bulldog who is the designated cat-sitter while the humans are at the store. Once the car leaves the driveway, five cats of varying breeds skedaddle from the sofa to spill milk, stir up fireplace ash, empty the hamper, disrupt a vanity, and more. Dog worries that their raucous acting out will reflect badly on him: “Would he still be a good Dog, a smart Dog, the very best Dog?”

His idea to entice good behavior with kibbles disappears with his own hunger for meals for puppy labs and the like. As he naps, the cats remember that they love Dog and bring the house back to perfect order as the family arrives. Dog gets his rewards, then observes the pile of sleeping felines and thinks, “Good cats…Smart cats. The very best cats.”

Dog revels in hugs from his young owner, who instructs him to cat-sit while the family goes to the store. He benevolently eyes the five cats, and a thought-bubble shares his optimism: “First we will sit and then we will stay.” The cats have other plans, though, swiftly dispersing to wreak havoc on the kitchen counters and in the sooty fireplace (“‘Out,’ barked Dog. Swish! went the ashes”).

Santat’s (Tom’s Tweet) overlapping comics panels suggest frenetic activity; spreads picture Dog running from room to room, and the repeated words “No cat. Or was there?” encourage readers to find pointy ears under a blanket or a tail protruding from a clothes hamper. With skillful use of repetition, an agreeable and entertaining animal cast, and a tidy ending of the best kind, dog people and cat people alike have reason to approve.”—Publishers Weekly, starred review.

“Printz Honor-winner Going turns from teens and preteens to preschoolers in her picture-book debut. 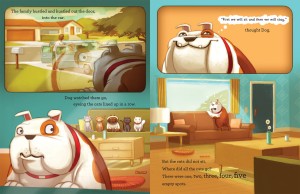 When his family goes shopping, a much-loved bulldog is told, “‘Watch the cats, and make sure they don’t get in any mischief.'” Uh-oh: Five cats rapidly wreak havoc, spilling milk, breaking flowerpots and toppling books. Dog, exhausted from chasing the elusive, wily felines, gets into some mischief himself: The bag of cat treats he’d intended to use to induce good kitty behavior proves just too tempting. After he devours it and falls asleep on the messy kitchen floor, the cats team up to tidy the joint, room by room, and the family arrives home none the wiser.

Going’s text is deadpan: Her Dog means well in attempting to apply to the willful cats the same sort of reward-oriented discipline that guides his life. Santat’s kid-pleasing pictures, with frequent inset panels, thought bubbles and plenty of visual play-by-play, evoke children’s animated cartoons. (He created Disney’s TV cartoon The Replacements.) Some 50 depictions of Dog (excluding funny endpapers that showcase a dozen of his most evocative facial expressions), convey the temporary chaos broadly yet thoroughly. Dog’s bewilderment at his returning owner’s praise morphs into a look of rapt delight as five treats come his way: doggily spot-on. A rollicking romp.”—Kirkus Reviews

“Dog has got it going on! He can sit, stay, dance, and gobble up treats to the pride of his owners: “Good Dog. Smart Dog. The very best dog.” When the people leave the house, they tell Dog to make sure the five cats don’t get into any mischief. Which, of course, they do. Dog chases one off the kitchen counter (milk spills everywhere), from behind the fireplace (there goes a cloud of ash), out of the hamper (cue underwear explosion), and more.

Filled with canine anxiety that he will no longer be showered with human love, Dog gorges on cat food and passes out. This is a classic romp, with Santat’s expressive cartoon animals bounding about from various pet-level perspectives; the scenes of Dog’s dwindling, imaginary dog-treat nirvana are especially funny. Going brings it home with a sweet ending in which the cats (“they loved Dog”) tidy up the house while he sleeps, and snuggle up to him when they’re finished. “Good cats,” thinks Dog. “Smart cats. The very best cats.”—Booklist