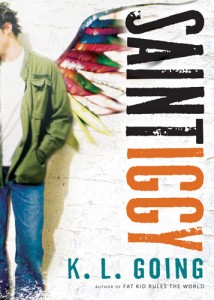 When Iggy Corso gets kicked out of high school, there’s no one for him to tell. His mother has gone off, his father is stoned on the couch, and because the phone’s been disconnected, even the  social worker can’t get through. So he leaves a note, and goes out into the world to make something of his life, but that’s not so easy when you’re only sixteen, live in public housing, have no skills and your only friend, Mo, is a pot-smoking, law-school drop out who’s thinking about joining the Hare Krishnas. But Iggy is Iggy, and he’s got the kind of wisdom that lets him see things no one  else can.

In the week leading up to Christmas, Iggy travels all over the city, finding himself in the lap of luxury, the grayness of a never-ending drug party, the haven of a chapel, and finally at the door to a choice that will change his world forever.

Reviews:
"In her most impressive achievement yet, Going (Fat Kid Rules the World) gets inside the mind of a teenager who has fallen between the cracks and, facing his options, knows he’s “shit out of luck.” Like the narrator of Chris Lynch’s Inexcusable , 16-year-old Iggy Corso is an unreliable narrator whose account of events clashes with what readers know of how the world works. The brilliance of the novel is the way in which Iggy’s perceptions call into question readers’ own sense of society’s structure and inner workings. Born of an addicted mother and living in New York City public housing with his parents (both addicts), Iggy knows that a high school education is his only means of escape. Yet he faces expulsion for “acting out” in class. He knows he needs to come up with a “How-to-Change-Everyone’s-Mind- about-Me plan,” so he can attend a hearing and get back into school. When Mo, his only friend, scores some drugs on credit from Freddie, the drug dealer whom Iggy blames for his parents’ addiction, the author fluidly juxtaposes the two friends’ realms. Mo, who is “renouncing” his Upper East Side life, heads home to get the money for the drugs from his mother and takes Iggy with him. Some humorous scenes of Iggy interacting with the Park Avenue crowd demonstrate what a fish out of water he is. Yet, when Mo believes that all can be fixed up with Freddie easily, their roles shift and Iggy reigns as the expert in the world of New York’s underbelly. The adults here are just as well-drawn as the teens; a sympathetic principal, cop and priest, as well as Mo’s mother, all help pave the way for Iggy’s internal growth. The book delivers a powerful anti-drug story without being preachy, and in perhaps the book’s greatest strength, the events remain painfully authentic to Iggy’s circumstances. Readers will be rooting for Iggy as he performs his ultimate heroic deed."—Publishers Weekly, starred review.

"When he is suspended from high school for an altercation with a teacher, Iggy feels completely misunderstood. As he waits for the hearing that will decide whether he will be expelled, he vows to change everyone’s perception of him by following his principal’s advice: “Do something that contributes to the world.” Expecting no support from his drug- addicted mother and “stoned off his ass” father, Iggy turns to a former tutor and friend, Mo, a college-dropout interested in pot and Eastern religions. Then Mo’s own drug habit escalates. With Iggy tagging along, Mo heads to his wealthy mother’s apartment for money, and in Mo’s mother, Iggy finds the parental care he craves. Readers will want to talk about the shocking ending and its religious imagery, which raises questions about martyrdom, class politics, and the many ways that children can slip away from help. The author of Printz Honor Book Fat Kid Rules the World (2003), avoids heavy symbolism and message by grounding her story in realistic, grimly vivid urban details, and she creates a memorable character in Iggy, whose first-person voice is earnest, angry, sarcastic, and filled with small insights that reveal how people care for and mistreat each other. Teens will connect with Iggy’s powerful sense that although he notices everything, he is not truly seen and accepted himself."—Booklist, starred review.

"Iggy Corso, 16, doesn’t do drugs, even though he was born addicted to crack. He lives in a city housing  project, in an apartment filled with furniture that his stoned and drunken father collects from the street. Iggy’s mother is an addict who has been AWOL for a month. The cool thing about the teen is that, despite his parents and his environment, the doesn’t feel sorry for himself. A freshman who has failed two grades and been suspended eight times, he takes things for what they are, until he gets suspended again, pending a hearing. His principal says to him, “You’ve had a lot to overcome…but….We can all…do something that contributes….” After listening to this, Iggy realizes that his only chance for the future is to get back into school. The principal’s statement haunts him throughout the book. He enlists help from his so-called mentor/friend, Mo (who was suspended from pre-law school after being caught smoking pot), but his association with this disaffected youth from a wealthy family creates a whole new set of problems. Thick pencil lines run down the inner margins of the pages; Iggy’s life is like these lines, on the edge, reaching out, searching for somewhere to go. The story is told in widely spaced paragraphs, making it a good choice for reluctant readers. Like Troy Billings in Going’s Fat Kid Rules the World (Putnam, 2003), Iggy Corso is unforgettable."—School Library Journal, starred review.

"This charmer, set just before Christmas, will haunt readers long after experiencing the final pages. Iggy, a 16-year-old freshman, is about to get kicked out of high school permanently, pending a hearing. Iggy recognizes that he needs a legal guardian and legal representation to accompany him, but he will have neither. His parents are druggies and his meth-addicted mother has been missing for weeks. Iggy decides that he needs a plan to show the world what he’s really made of. He finds Mo, his supposed mentor, a college dropout who’s renounced all material goods. Short on funds, Mo decides to buy drugs on credit–from the same dealer who supplies Iggy’s parents–and then takes Iggy to his wealthy mother’s apartment to ask for money. Here, Iggy’s plan gels and all readers are left to do is hang on for the incredible ride. Wild plot twists combined with Iggy’s endearing narration will keep turning pages and readers cheering this strangely heroic anti-hero."—Kirkus Reviews.

Note to teachers
What might short stories written by William Faulkner, James Joyce, Philip Roth, or Flannery O’Conner have in common with a modern, edgy teen novel?

Not much? Think again.

When my third novel, Saint Iggy, was born, I was taking a short story class in New York City. I’d never studied the classic writers or the short story form, so when I was asked to submit a story to an anthology I decided it was time to learn some new skills.

I wasn’t sure what to expect. Would the stories be dull and needlessly complex? Would my classmates, most of whom were retired men and women taking the class for pleasure rather than course credit, have interesting things to say? How would reading short stories influence my writing?

I couldn’t have imagined the answer to that last question. Not only did I finish my story for the anthology, but I infused the ideas from the class into my new YA novel. I kept the same gritty, underbelly world of Fat Kid Rules the World, and the same musically influenced characters (Iggy is named after Iggy Pop, but he’s more like Sid Vicious) but now I combined these traits with literary ideas like tropes – a word repeated throughout the text, often used to imply more than it’s literal meaning. (Can you find the trope in Saint Iggy?)

If you look at my notes for the course you’ll find Iggy’s name written in the margins of my papers. “Flannery O’Connor’s characters are beaten into the position they’re in by life. They can’t figure how to get out.” That’s Iggy. “The villains become the heroes because we’re allowed to connect with them as characters.” Iggy. “James Joyce uses the imagery of white snow falling all over Ireland to symbolize something greater than what the text names outright.” Iggy.

Exploring the work of these writers, along with hearing the comments from the men and women in my class whose observations crossed generational lines and offered glimpses into lives very different from my own, allowed a story to grow that might not have otherwise.

That’s fusion. Learning from the past, but applying our own personal twists to make those ideas new and unique in the present.